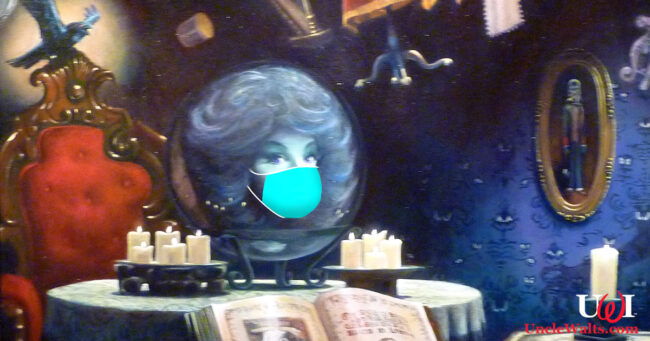 You can’t tell if the grim ghosts are grinning behind their face masks.

UNCLE WALT’S H.Q., SVALBARD — With fans still reeling from the many changes to Disney parks, Uncle Walt’s Insider has just learned of more to come. There are potential drastic changes to the Haunted Mansion attraction on their way, incorporating the COVID virus into the ride!

Is nothing sacred? Won’t someone think of the children?

“I’m a singer, director, and music arranger. I’ve done a lot of work in jingles, and radio and TV commercials, singing deep bass. And I’ve got some connections at Disney. The other day, I got a call from one of the Disney folks, asking if I’d be willing to re-dub a song that was originally sung by Thurl Ravenscroft. Thurl Ravenscroft!

“Now, immediately, my heart starts racing. I mean, Thurl was a legend. He was grrreat! And to be asked to re-do something he did? That’s unheard of. Why would it ever need to be re-done? But then, the Disney guy continued that they needed some new lyrics.”

“They want to update the song at the Haunted Mansion, ‘Grim Grinning Ghosts.’ Make it more relatable to modern times. I personally don’t think it needs it, but it won’t be that difficult. And Disney pays well, so there’s that. So, I said I’d take the job, and the Disney guy said he’d send me the lyrics.”

Well, we at Uncle Walt’s Insider can’t let scoop go unscooped. We emailed back, and asked our source, Max Jim, if he’d be willing to share the new lyrics.

He said that he couldn’t send us the whole song, something about a non-disclosure agreement, but he was nice enough to send us a couple of verses. For your convenience, we’ve reproduced it below. [Ed.: For legal reasons, we have to warn you that we attempted to contact Disney to verify this, and they didn’t respond.]

Now don’t rub your eyes
And don’t sneeze inside
Or a silly spook may sit by your side
Shrouded in a hazmat suit
They can’t even terrorize
Grim grinning ghosts stay home and sanitize!

Can you think of something that rhymes with “hazmat suit”? Let us know in the comments below!

July 22, 2020 by X in California, Florida
© 2020 Uncle Walt's Insider. All rights reserved. All images used with permission. Unless otherwise attributed, all images licensed under Creative Commons CC0 license. This site is protected by reCAPTCHA and the Google Privacy Policy and Terms of Service apply.