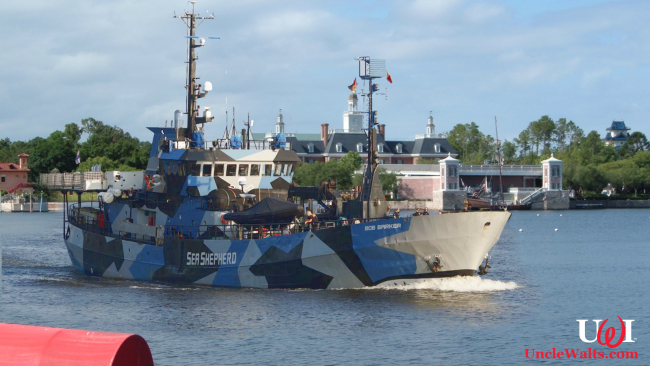 Are the “Friendship” boats a cover for whaling activities?

AMSTERDAM, NL — The Sea Shepherd Conservation Society, once featured on the Animal Planet series Whale Wars, has announced their newest campaign against alleged Norwegian and Japanese whaling activities: they will attempt to disrupt operations at the those countries’ pavilions in the World Showcase section of Walt Disney World’s Epcot Park, Resort, Spa, & Whale Cannery.

In a prepared statement, Sea Shepherd asserts that the Norway and Japan pavilions are just a front for “an extensive whaling operation that is hidden under the noses of unsuspecting tourists.” The anti-whaling ship Bob Barker will be deployed to the World Showcase Lagoon to disrupt the “whaling fleet.”

So as not to disrupt the nightly Illuminations: Reflections of Earth fireworks, they have agreed to dock the boat backstage each night during the show. Sea Shepherd founder Paul Watson stated, “Sure, we want to end the needless slaughter of whales, but honestly, we also really love fireworks.”

We reached out to officials at the Norway and Japan pavilions for comment. Once the laughing stopped, we were told that they had no comment and that the truth would speak for itself.

Uncle Walt’s Insider will continue to monitor the World Showcase Lagoon and report back the moment the Bob Barker arrives. Keep checking back for more on this breaking story.

What is your favorite whale dish at Epcot? Let us know in the comments below!

August 28, 2018 by Walt in Florida
© 2020 Uncle Walt's Insider. All rights reserved. All images used with permission. Unless otherwise attributed, all images licensed under Creative Commons CC0 license. This site is protected by reCAPTCHA and the Google Privacy Policy and Terms of Service apply.