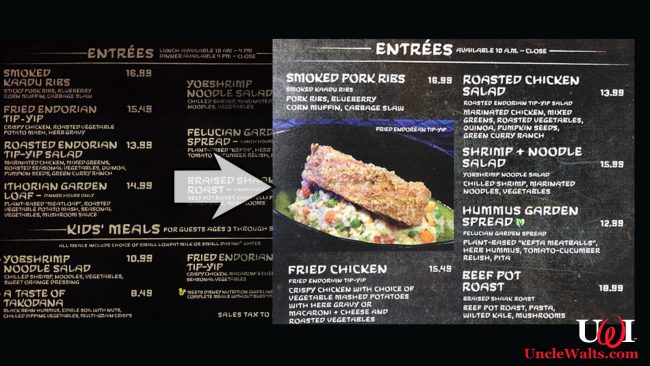 You had to go to Disneyland to get your Endorian Tip-Yip.

WALT DISNEY WORLD, FL — It looked like a simple signage change, but the truth is more complex. When Galaxy’s Edge restaurants changed the names of their dishes last week, it wasn’t to aid local guest’s understanding. Actually, the food vendors at Batuu no longer had access to alien food ingredients, and were forced to switch temporarily to local (Earth) products.

So instead of Kaadu Ribs, they began selling plain old pork ribs. And all of their Endorian Tip-Yip was replaced with chicken.

“Fortunately this negotiation ended better than the last one. We don’t have too many Jedi left.”

Do you prefer kaadu or pig? Let us know in the comments below!

October 25, 2019 by Marty in Florida
© 2020 Uncle Walt's Insider. All rights reserved. All images used with permission. Unless otherwise attributed, all images licensed under Creative Commons CC0 license. This site is protected by reCAPTCHA and the Google Privacy Policy and Terms of Service apply.