AI upgrade leads to brawl at Disney’s Hall of Congress 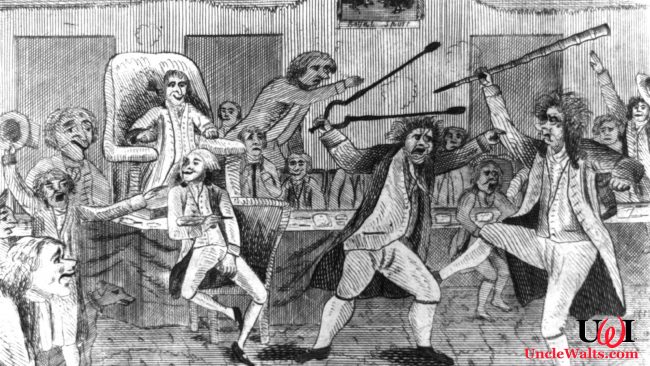 They should have known not to give them competing programming.

EPCOT, FL — A recent AI software upgrade at Disney’s Hall of Congress, located in the dark alley behind the American Adventure Pavilion, led to an all-out brawl between the Democrat and Republican animatronic figures. The upgrade happened before the park opened, and Disney Imagineers were able to restore the original software from backup.

Disney (the company) spokesperson, Jun Disney (no relation), shared details on the upgrade.

“Software upgrades are routine, and our new AI takes advantage of machine learning through real-world observations. Unfortunately, half the animatronics were programmed to get their ‘real world observations’ via a direct feed from Fox News, while the others were wired into CNN. Big mistake.

“As soon as the software was loaded and the animatronic figures were powered up, they took one look at each other and started throwing punches. It was the most amazing thing I have ever seen! We may end up using this over at the ESPN Wide, Wide, Wide World of Sports Complex, Casino & Spa! Wow! What a show!

“But for now, it was too dangerous with the chairs flying, not to mention the language. So they powered everything down and loaded up the backup, which plugs them into NPR. They all fell asleep immediately. Problem solved.”

What’s the over/under on a Democrats v Republicans all-out brawl for victory? Let us know in the comments below!

Cover photo: Artist’s concept of the Great Epcot Congressional Uprising of 2020. Photo from Library of Congress [public domain] via Wikimedia.

February 3, 2020 by Walt in Florida
© 2020 Uncle Walt's Insider. All rights reserved. All images used with permission. Unless otherwise attributed, all images licensed under Creative Commons CC0 license. This site is protected by reCAPTCHA and the Google Privacy Policy and Terms of Service apply.