15 little-known facts about the Candlelight Processional! 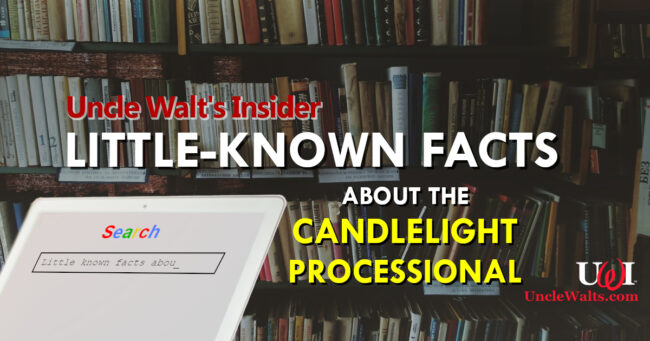 It’s a spectacle of Christmas spirit like no other at Epcot and Disneyland! The Candlelight Processional combines an orchestra, massive choirs, and a celebrity narrator to celebrate the true meaning of the holiday season. (At least until Disney’s current bent toward political correctness / inclusiveness / cultural sensitivity / etc. gets hold of it and turns it into a Kwanzachristmachanukafestivus show, led by Olaf singing “That Time of Year.”)

The event is named for the famous explorer, Dr. Albert Candlelight.

And his rarely-discussed pet dog, Processional.

Starting this year, at the end of the Processional the narrator will stomp on a glass and the audience will yell “Mazel Tov!”

Guess the Kwanzachristmachanukafestivus-ication has already started.

The singers are color-coded by flavor.

Red and black for licorice, green for spearmint, and gold for banana. Yum!

The Candlelight Processional stage accelerates from zero to 60 in 2.8 seconds.

Hundreds of celebrities have narrated the Candlelight Processional.

Not all at once.

But by far, the most celebrated celebrities to narrate the event were LeVar Burton (host of Jeopardy!, 2021) and Groot (Tales to Astonish #13, 1960).

When deaf actress Marlee Matlin uses sign language for her narration, she will only sign the King James Version of the scriptures.

Watch for the finger-spelled “E-T-H” at the end of many signs.

Christmas caroling has been an event since the earliest days of Disneyland.

Much before that the non-existence of the park made the event nearly impossible.

You can purchase a Candlelight Processional dining package starting at around $70 per person, tip not included.

It includes an overpriced meal, and a souvenir sticker that lets you wait in line for the event for only one hour instead of two.

Guests choirs are often instructed just to mouth the words and let the Voices of Liberty carry the whole thing.

Not a bad idea. Those folks can sing.

The first Candlelight Processional at Walt Disney World took place in 1972, in a swampy field.

Because EPCOT Center had not been built yet.

While audiences at Epcot only see the choirs process in from the back of the American Gardens Theatre, the processional actually begins at the Main Street USA train station.

The singers then run a full marathon through all four parks before ending on stage.

The players of the herald trumpets are all named “Harold.”

It’s a requirement, like the servers at Victoria & Albert’s all being named “Steve.”

After 6pm, the American Gardens Theater becomes an adults-only venue.

So catch the early showing if you want the family-friendly version.

December 18, 2021 by Marty in California, Florida
© 2020 Uncle Walt's Insider. All rights reserved. All images used with permission. Unless otherwise attributed, all images licensed under Creative Commons CC0 license. This site is protected by reCAPTCHA and the Google Privacy Policy and Terms of Service apply.