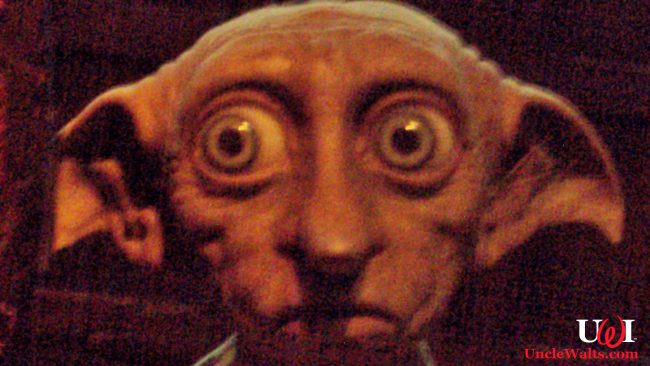 Guests describe the place as magical, but does it operate using slave labor?

UNIVERSAL CITY, CA — For Harry Potter fans, a visit to “The Wizarding World of Harry Potter” is almost like actually being a part of the magical world of J.K. Rowling’s books and the resulting movies. But Uncle Walt’s Insider now reveals a dark secret lurking out of sight at Universal Hollywood: the park apparently has hundreds of house elves working in secret, for little or no pay.

A legacy of indentured servanthood

House elves, short magical creatures with bulging eyes and large pointed ears [Ed.: Much like Bernie Sanders], have long been a fixture in older, well-off wizard families. According to Rowling’s second Potter book, Harry Potter and the One With the Diary and the Giant Snake, house elves are bound to serve a family for life, unless released from service by supplying them with clothes, a gold watch, and a letter of reference.

House elves, for the most part, are not paid for their endless hours of work, and efforts have been made over the years to enact reforms providing for wages and minimum standards of working conditions. It is not clear, however, whether current employment legislation covers non-human magical beings such as house elves — even in California, with its strict socialist laws and organic fireworks requirements.

Unpaid labor on the left coast

The topic is likely to gain more publicity with the discovery of a substantial number of house elves working at Universal Studios Hollywood. A spokesperson for the Society for the Promotion of Elvish Welfare (S.P.E.W.) says that this “legal servitude” needs to be stopped quickly. “Can you imagine if other businesses started using house elves instead of paid labor?” said “Ms. G.” “Sure, as my husband Ron likes to point out, labor costs would plummet with most of the savings passed on to the consumer, but there are ethical problems to consider!”

Uncle Walt’s will keep you informed on developments in this story, especially any time one of our house elves calls it to our attention.

Pay house elves – yay or nay? And can you crochet? Let us know in the comments below!

May 10, 2018 by Marty in California
© 2020 Uncle Walt's Insider. All rights reserved. All images used with permission. Unless otherwise attributed, all images licensed under Creative Commons CC0 license. This site is protected by reCAPTCHA and the Google Privacy Policy and Terms of Service apply.