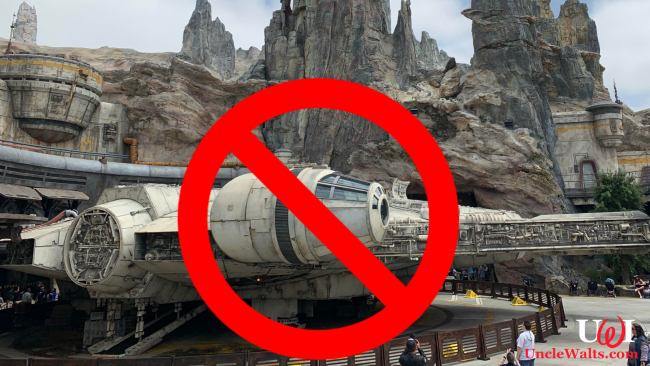 The Falcon is grounded for 3-4 weeks for extensive repairs.

DISNEYLAND, CA — It took less than ten days. That’s how long the new Star Wars: Galaxy’s Edge and Spa area has been open at Disneyland, with the Millenium Falcon: Smuggler’s Run ride as its centerpiece. But now that attraction — the only ride in Galaxy’s Edge until Rise of the Resistance opens later this year — is closed for repairs.

Smuggler’s Run puts guests into the cockpit of the Millenium Falcon, allowing them to fly the ship through a trial adventure. Guests are trying for a slot on Hondo Ohnaka’s crew of misfits and smugglers. But it only took one teen pilot with an eye for mayhem to bring the Falcon down.

Ohnaka spoke with Uncle Walt’s Insider about the incident.

“We’ve been letting anyone who signs up try out to be part of the Falcon’s crew,” he said. “We’ve had some pretty shaky people try out, but for the most part they’ve at least tried to complete the mission. But yesterday, there was this one teenager in the right pilot’s chair who seemed determined to do the maximum damage to the ship. He kept steering it into every object he could.

“There’s an override built in where Chewbacca can pilot the ship remotely. He usually only does it at the end of the mission, though, to land the ship safely. Somehow this kid found a way to disable the override, and plowed the Falcon straight into the ground just outside of Black Spire Outpost.”

While the unnamed teen pilot and the other five on board were saved by their seat belts, the ship was not so fortunate.

“No, the Falcon will be down for a few weeks,” says Ohnaka, “so we won’t be giving any more tryouts for a while.

“Frankly, we need some kind of screening process. Just a week or so ago we started getting a flood of applicants with no space flight experience at all! Makes you wonder how they even got to Batuu.”

Maximum damage does sound kind of fun, doesn’t it? Let us know in the comments below!

Cover photo: The Millenium Falcon before the accident. Photo by CrispyCream27 [CC BY-SA 4.0] via Wikipedia Commons.

June 11, 2019 by Marty in California
© 2020 Uncle Walt's Insider. All rights reserved. All images used with permission. Unless otherwise attributed, all images licensed under Creative Commons CC0 license. This site is protected by reCAPTCHA and the Google Privacy Policy and Terms of Service apply.