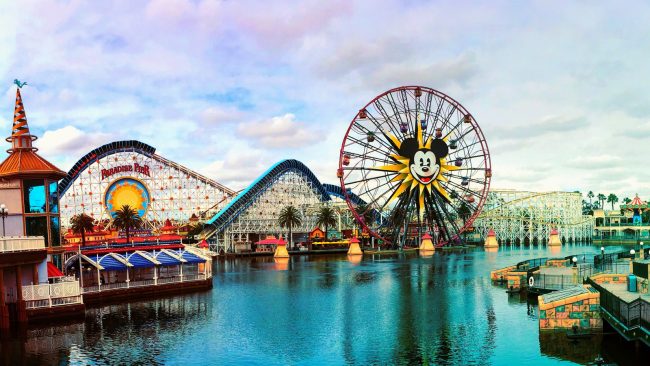 Most of the former Paradise Pier area at Disney California Adventure Park has been closed, ostensibly to convert it to “Pixar Pier,” a celebration of that animation studio’s biggest hits. However, Uncle Walt’s Insider has learned that the new land will actually be digitally rendered in real time, rather than constructed usually traditional techniques.

Paradise Pier was one of California Adventure’s original lands — and one that drew heavy criticism from Disney purists. Up until the park’s 2001 opening, Disney theme parks had predominantly featured immersive lands and custom attractions. Fans pointed to the Pier area as a tremendous departure from that standard, as its attractions were slightly modified off-the-rack amusement park rides, and the theming was, basically, “you’re in an amusement park.”

As part of an ongoing renovation of the California Adventure park, Disney announced last year that Paradise Pier would be extensively rethemed, becoming a living tribute to beloved films from Pixar Studios. The newly renamed “Pixar Pier” is to open later this year.

An animated tribute to animation

Sources within Disney Imagineering have revealed that the new land will not just be a Pixar overlay onto existing physical structures. Instead, the entire Pixar Pier area with be created virtually, in real time.

“Pixar creates whole worlds within the computer,” Imagineer Kenny Keller told Uncle Walt’s in a telephone interview. “Believable worlds, beautiful worlds! And we thought, we can’t create a Pixar area the old-fashioned way. They use computers, so we’ll use computers! The technology is there for the first wholly-immersive, believable 3-D rendered theme park, and that’s what we’re making.”

Although some details of the area’s design have been released, this is the first suggestion that it will no longer be a physical land.

“We’re using a combination of Pixar’s RenderMan software and holodeck technology we bought from Paramount and adapted for greater numbers of guests,” Keller continued. “There are so many bonuses to doing it this way. For one thing, if we ever want to change it up, it’s a software patch, not months of extensive construction. Also, having the area be virtual, it frees up a lot of land.”

Sources suggest the former physical Paradise Pier area will be converted to an additional parking garage for the Disneyland Resort.

What do you think of this new technology? Let us know in the comments!

January 15, 2018 by Marty in California
© 2020 Uncle Walt's Insider. All rights reserved. All images used with permission. Unless otherwise attributed, all images licensed under Creative Commons CC0 license. This site is protected by reCAPTCHA and the Google Privacy Policy and Terms of Service apply.