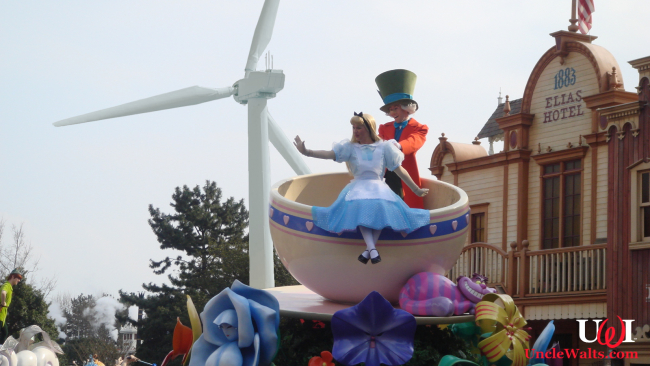 Disney insists the measure is only precautionary.

ANAHEIM, CA — Showings of Disneyland’s beloved and environmentally friendly “Main Street Wind Turbine Parade” have been halted, at least temporarily, after statements by a public official suggested the floats’ wind turbines might cause cancer.

“We’re sure they’re safe,” says Disney (the company) spokesperson Jun Disney (no relation). “We’ve been running this particular parade for the better part of a decade. And only a handful of the Cast Members on the floats have reported cancer diagnoses of Stage 2 or greater during that time.”

It goes with the look, so…

“Well, we have been a little curious,” says Disney (no relation). “I mean, the guy ‘working with’ the Mad Hatter no longer needs the nose prosthetic. His has grown to fill the job. And Tinker Bell now glows in the dark, which is cool. But then, so does the C.M. ‘working with’ Tink, even when she’s not in character. Have to admit she’s a little bothered by that.”

Uncle Walt’s will follow up on this story, right after we get ourselves checked out by our oncologist.

Are you suffering from Disney parade cancer? Do you need an experienced legal team to fight on your behalf? If so, then let us know in the comments below, or call 1-866-UNCLE-WALT’S-LAW-FIRM (don’t forget the apostrophe!)! Call now! Operators are standing by, and they’d like to sit down!

April 11, 2019 by Marty in California
© 2020 Uncle Walt's Insider. All rights reserved. All images used with permission. Unless otherwise attributed, all images licensed under Creative Commons CC0 license. This site is protected by reCAPTCHA and the Google Privacy Policy and Terms of Service apply.