Kaepernick’s Disney deal: millions per year to sit on benches 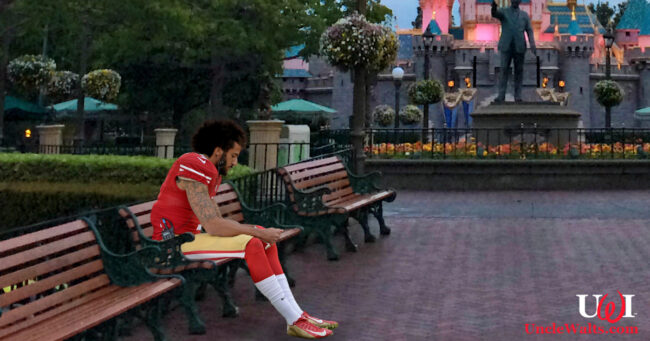 The former NFL player will rotate between Disney’s U.S. theme parks and spend time on several benches in each one.

BURBANK, CA — Details have emerged about Colin Kaepernick’s new contract with The Disney Company. Apparently the activist and shoe salesman is being paid millions of dollars to sit on benches at various Disney theme parks.

Uncle Walt’s Insider spoke to Kaepernick’s agent, who told us, “It’s not big thing for him. He’s used to getting paid to sit. This job is definitely in his comfort zone.”

How much would you want to be paid to sit next to him? Let us know in the comments below!

Cover photo: Colin Kaepernick, looking quite at home at Disneyland. Photo by Melissa Hillier [CC BY-2.0] via Wikimedia.

July 14, 2020 by Marty in California, Florida
© 2020 Uncle Walt's Insider. All rights reserved. All images used with permission. Unless otherwise attributed, all images licensed under Creative Commons CC0 license. This site is protected by reCAPTCHA and the Google Privacy Policy and Terms of Service apply.