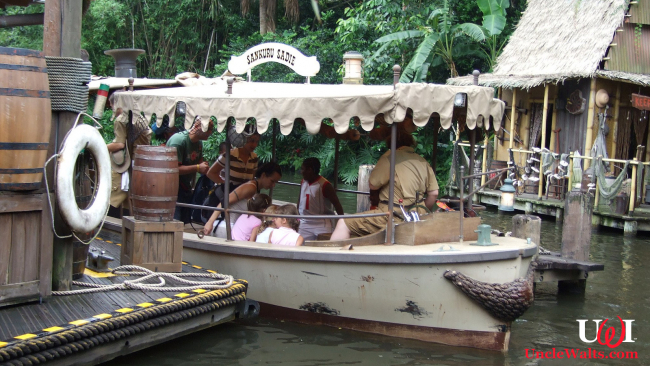 Oh, to relive the days when we truly believed there was a backside of water.

ANAHEIM, CA — The Jungle Cruise has been a crowd favorite since it opened at Disneyland in 1932, and at the Magic Kingdom six years later. It has all the hallmarks of an entertaining attraction: moisture, dad jokes about wildlife and primitive peoples, and gunfire. But apparently, one Jungle Cruise “skipper” isn’t in on the joke!

Your reporter was perplexed when riding California’s version of the ride recently. The skipper stuck to the script, but never cracked a smile, and seemed to believe he was actually touring us through the waterways of the world. We asked about him when we returned.

“He and I trained as skippers together, and he let slip that he’d never actually been on the ride before. So Kyle, that was the skipper training us, pulled me aside and said he and the other skippers had been waiting for someone like this. They taught him how to spiel without ever telling him he wasn’t an actual tour guide, or that he was telling jokes.”

“So far,” Magda says, “we’ve been able to keep him going for over six months. He does ask occasionally why people would laugh about his favorite plants, or if elephants really can leap twelve feet. But for the most part he’s just clueless.”

At last word, Aaron had become marginally suspicious that there was an explorer named Hontas that would put up with a rhino prodding him from behind.

Do you think he really tried to get the jeep to turn over? Let us know in the comments below!

Cover photo: Skipper Aaron isn’t in on the joke. Photo by DearCatastropheWaitress [CC BY 2.5] via Wikipedia.

March 5, 2019 by Marty in California
© 2020 Uncle Walt's Insider. All rights reserved. All images used with permission. Unless otherwise attributed, all images licensed under Creative Commons CC0 license. This site is protected by reCAPTCHA and the Google Privacy Policy and Terms of Service apply.