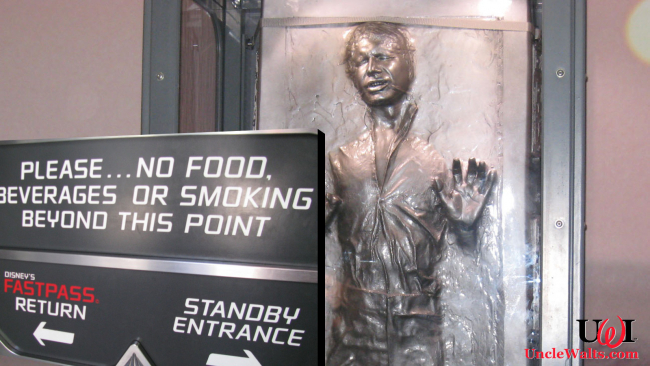 ANAHEIM, CA — Disney Parks and Resorts and Spas announced today that the new Star Wars: Galaxy’s Edge areas will feature a “Carbonite Freezing Experience.” This will be an added-cost attraction that will allow the purchaser, or the guest of his choosing, to be frozen in carbonite, like Han Solo in The Empire Strikes Back.

“We anticipate a lot of your nerdier Star Wars fans will want to try it out once, just to see what it’s like,” Disney Parks and Resorts and Spas chairman Bob Chapek tells Uncle Walt’s Insider. “But really, it isn’t a pleasant experience, according to the interns we tried it out on. We expect eventually it’ll just be parents buying it for their whiny children or sullen teenagers.”

The Carbonite Freezing Experience is expected to open with the new Galaxy’s Edge areas, in Disneyland this summer and at Disney’s Hollywood Studios in Florida this fall.

Who would you freeze in carbonite? Let us know in the comments below!

January 21, 2019 by Marty in California, Florida
© 2020 Uncle Walt's Insider. All rights reserved. All images used with permission. Unless otherwise attributed, all images licensed under Creative Commons CC0 license. This site is protected by reCAPTCHA and the Google Privacy Policy and Terms of Service apply.