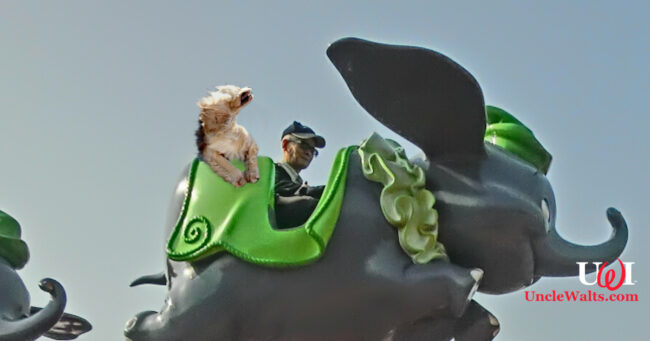 At least one dog went and grabbed the keys on Pirates of the Caribbean.

ANAHEIM, CA — Disneyland Theme Park and Spa announced today that its new “Bring-a-Pet Thursday” venture was a not a complete failure.

Disney (the company) spokesperson Jun Disney (no relation) told Uncle Walt’s Insider, “Hey, we had literally thousands of dogs and cats here, and at least one llama, and most of them had a blast. Even with all those different sized animals, and with ride restraint systems that were intended for humans, only around a hundred or so pets actually ever fell out of an attraction. And none died, despite what rumors you may have heard.” Disney (no relation) may be referencing the sighting of several veterinary ambulances removing bodies from the park before death was officially pronounced.

Bring-a-Pet Thursday continues next week on Thursday (duh), unless someone tells PETA.

What do you want to ride with your pet? Let us know in the comments below!

February 7, 2022 by Marty in California
© 2020 Uncle Walt's Insider. All rights reserved. All images used with permission. Unless otherwise attributed, all images licensed under Creative Commons CC0 license. This site is protected by reCAPTCHA and the Google Privacy Policy and Terms of Service apply.