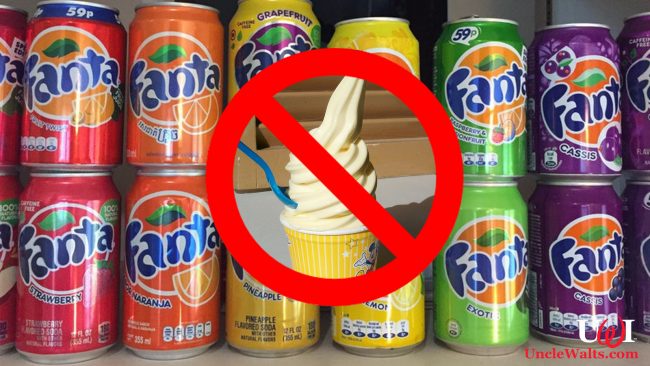 It’s no longer the creamy pineapple treat people love, but at least there are more flavors.

ANAHEIM, CA — It’s one of the most popular frozen treats available at Disney parks, second only to frozen churros: the Dole Whip. But recently, guest after guest noticed that the taste and texture of this pineapple delight had radically changed — and now Disney confirms that “Fanta Whip” has replaced Dole Whip at its Disneyland Resort and Spa snack counters, and the change will soon be made at the Walt Disney World Resort and Spa.

Fanta, a cloying carbonated soft drink with artificial fruit-suggestive flavors, is beloved by dozens of not-particularly-picky soda drinkers around the world.

“It was obvious to me from the first bite,” Disneyland Park guest Cecilia Bisera tells Uncle Walt’s Insider. “Instead of that smooth, frozen texture and fresh-pineapple taste, I got a cup of what tasted kind of like a cheap almost-pineapple-flavored soda poured over crushed ice. Actually, not ‘kind of’ — it tasted exactly like that.”

Bisera adds, “I knew Dole Whip. Dole Whip was my friend. And this is no Dole Whip.”

Disney spokesperson Jun Disney (no relation) tells Uncle Walt’s, “Yes, it’s a change, but it’s one we are sure our guests will love! The old Dole Whips were restricted to just pineapple, but with Fanta Whips, we can serve all of Fanta’s fantastic flavors: pineapple, orange, grape, cherry, mango, kiwi, persimmon, prune, tomato, pancake syrup, and earwax!”

Disney (no relation) reveals one more surprise, exclusive to Uncle Walt’s Insider: “Fanta is actually owned by the Coca-Cola Company, so we hope to expand the Whips to feature some of their other unique soda flavors from around the world. I can’t wait to try my first Beverly Whip!”

Is your mouth watering for a Beverly Whip? Let us know in the comments below!

Cover photo, of just some of the many new Fanta Whip flavors, by anaythanay via Reddit and Sam Howzit [CC BY 2.0] via Flickr.

June 8, 2018 by Marty in California, Florida
© 2020 Uncle Walt's Insider. All rights reserved. All images used with permission. Unless otherwise attributed, all images licensed under Creative Commons CC0 license. This site is protected by reCAPTCHA and the Google Privacy Policy and Terms of Service apply.