Disney Concert Hall was to be plain, square, until dog ate blueprints 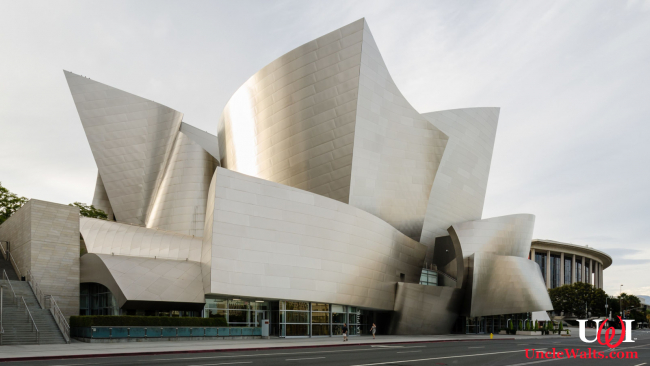 Should architect Frank Gehry still get credit for the design, or his dog Bosco?

LOS ANGELES, CA — The Walt Disney Concert Hall has a look all of its own, and architect Frank Gehry has been hailed for its unique look. But did he actually create the design?

Musicians, architects, and the general public hailed the look of the Hall when it opened in 2003, sure. But newly discovered documents indicated that the original design was for a plain, square, stone building.

How did the building get from a ordinary box to the shiny, curved sculpture we know? Simple: blame Gehry’s dog, Bosco. A spokesperson for the Concert Hall administration, Jun Hall (no relation), gives the details:

“We didn’t know it at the time, but Gehry actually created a boring building on purpose. His stated goal was to contrast the ‘nondescript exterior’ with the ‘intricate beauty’ of the music to be performed within. But personally, I think he was just having a bad year.”

The same thing happened to my homework

Hall (no relation) says that the dog’s memoirs have surfaced, explaining who was really behind the design.

“Apparently, the night before the plans were to be presented to the Arts Commission, (Gehry’s dog) Bosco ripped the blueprints to shreds. Gehry did what he could in taping it back together, but he obviously didn’t get the pieces back in the right order.

“Fortunately for all of us, it seems to have worked out anyway. And of course, Gehry pretended the end result was what he’d planned all along.”

What other projects could be improved by a dog chewing on them? Comment below!

June 22, 2019 by Marty in California
© 2020 Uncle Walt's Insider. All rights reserved. All images used with permission. Unless otherwise attributed, all images licensed under Creative Commons CC0 license. This site is protected by reCAPTCHA and the Google Privacy Policy and Terms of Service apply.