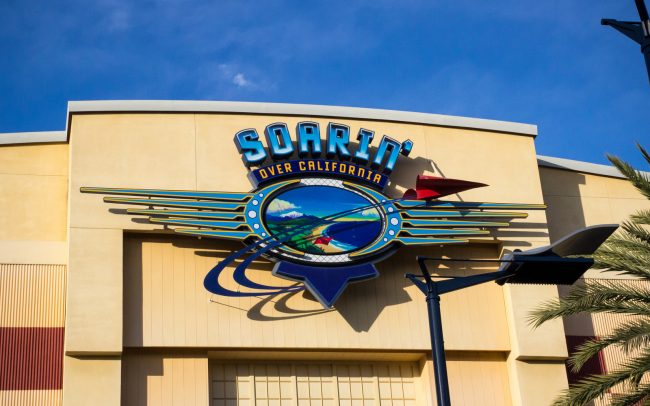 It is one of the most popular attractions the Disney Company has ever installed in its parks, still generating lengthy standby waits in both Disney’s California Adventure Park and Florida’s Epcot. It is a inspiring, thrilling but gentle ride suitable for all ages, and universally beloved — until this week, when astonished researchers located a guest who does not like Soarin’.

Soarin’ was an opening-day attraction in California’s second Disney theme park, California Adventure, which first welcomed guests in February of 2001. Officially named “Soarin’ Over California” in its first incarnation, the ride (famously inspired by Imagineer Mark Sumner’s erector set) lifts three rows of guests into the air in front of a large curved projection screen, and gives its riders the sensation of soaring over various scenes and attractions. [Note: Oh, that’s why it’s called “Soarin’.” I just now got that. Be sure not to publish this comment. – Ed.]

In 2005, the east coast’s Epcot got its own copy of the attraction, with the name shortened to “Soarin'” to downplay the California angle, although the projection was identical to the California Adventure version. Soarin’ instantly became the most popular attraction at Epcot.

In the summer of 2016, both parks’ Soarin’ films were replaced and the rides renamed to “Soarin’ Around the World.” The new film takes guests flying over attractions and scenery worldwide, including the pyramids, the Great Wall, the Korean Demilitarized Zone, the islands of Fiji, Monument Valley, and the Mall of America. The ride is now open in a third park, Shanghai Disneyland, and has been announced as an addition to the Tokyo Disney parks in coming years.

The continued popularity of Soarin’, particularly with the new worldwide sights included, is further attested to by the fact that Epcot has added a third theater to handle the crowds. However, Disney may find itself scaling back the growth of the Soarin’ franchise after researchers located a guest who does not like Soarin’.

Uncle Walt’s Insider reached out to the Disney Company, asking for contact info for this unusual guest. However, the company was unwilling to provide the information, telling us that “in inviting guests to take surveys and provide feedback, the Disney Company promise anonymity and privacy to those guests in exchange for their opinions.”

Fortunately, Uncle Walt’s has connections and mad h4xor sk1llz, yo, so we can report that the lone Soarin’-hater is a 33-year-old carpet installer named Gene Orman who lives in Sellersburg, Indiana (and who also has outstanding loans on two late-model car purchases and a $133,000 balance on the 20-year mortgage of his 3-bedroom home).

After the usual questions to us about how we found him and bluster about contacting the authorities, Mr. Orman settled down to talk Disney. “I really don’t hate the ride,” Orman insists. “This is all just being overblown. It’s just not a favorite.”

But it’s like a hang-glider, we replied, and you get to feel like you’re flying, and dip and dive and feel the wind in your face and experience the sights and smells…

“Yeah, I get the basic concept of the ride,” Orman interrupted. “I just, I don’t know. I find myself worrying that my Crocs will fall off and hit the people below me. I just don’t enjoy it. Now will you stop calling me?”

December 18, 2017 by Marty in California, Florida
© 2020 Uncle Walt's Insider. All rights reserved. All images used with permission. Unless otherwise attributed, all images licensed under Creative Commons CC0 license. This site is protected by reCAPTCHA and the Google Privacy Policy and Terms of Service apply.