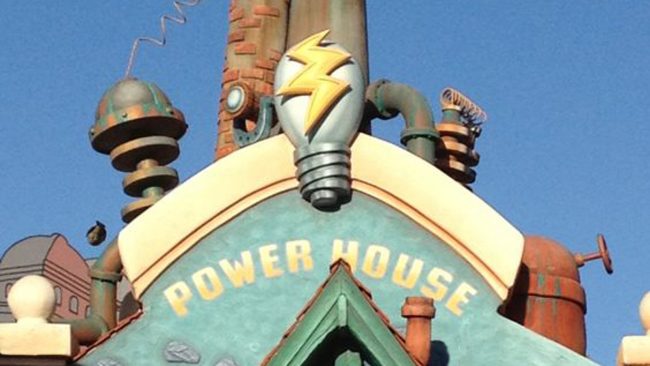 Last week’s power outage at Disneyland Park in California was not due to a “transformer problem,” as Disney spokespersons initially reported. Uncle Walt’s Insider has learned that the power supply was cut off intentionally by the Toontown Power House (pictured), and that the disruption was just the latest in an ongoing squabble between the park’s Toontown and Fantasyland residents.

Not a new issue

“The bosses at Disney like to put out this perfect image of Disneyland, where everyone lives in harmony,” Toontown spokesbunny Roger Rabbit tells Uncle Walt’s. “P-p-p-p-please! Those bunch of maroons in Fantasyland have been asking for trouble for years. And now they’re refusing to pay their electric bill. So yes, we cut the power!”

“We’re the problem?” a flabbergasted Grumpy replied, when told of Mr. Rabbit’s statement. “We’re the problem??? Sorry, but no. Those toonheads are the worst neighbors imaginable. I could handle it if it were just singing — we sing all the time here, you know. But day and night, all the time, it’s a constant barrage of beeps, buzzers, old-timey ‘ah-ooo-gah’ horns. And occasionally we’ll have pianos or anvils landing over here. It’s horrible living next to them.”

What may have started as a simple dispute between neighbors has grown due to the fact that only a single utility supplies power to all the Disneyland Resort — and that utility is the Toontown Power House. Fantasyland residents say that that gives Toontown an unfair upper hand in any dispute.

“It’s a monopoly, pure and simple,” Grumpy shares. “We don’t have any other options to get our power, and they lord it over us. And hey — didn’t Disney buy Marvel some years ago? Why aren’t we getting our electricity from one of Tony Stark’s arc reactors by now?”

At press time, the residents of Main Street USA are organizing a delegation to mediate the dispute between the two lands.

January 3, 2018 by Marty in California
© 2020 Uncle Walt's Insider. All rights reserved. All images used with permission. Unless otherwise attributed, all images licensed under Creative Commons CC0 license. This site is protected by reCAPTCHA and the Google Privacy Policy and Terms of Service apply.