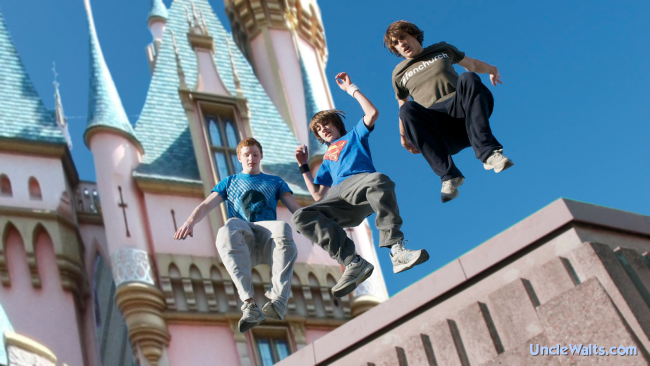 Jumping off of castles will no longer be discouraged on Adventures by Disney’s latest offering.

Adventures by Disney announced a new adventure today that is sure to appeal to young, super-athletic, risk-taking Disney fans of all ages and abilities: Disneyland Parkour.

Since 2005, Adventures by Disney has provided guided trips to locations around the world. Their exotic destinations have included Australia, Southeast Asia, and New Jersey. But for their latest adventure, Disney is sticking closer to home: the Disneyland Resort in California.

Adventures by Disney spokesperson Ronald Poulin provided the details: “It’s something we’ve wanted to do for a long time. And by we, I mean me. I’m really into parkour, and Disneyland’s landscape of buildings and landscaping would be amazing to move through.”

Parkour, for those who do not know, is a energetic movement through surroundings other than the traditional way of walking. “Parkourerers,” as they are called by the author of this article and no one else, try to see the areas around them in new ways, and will run, jump, vault, somersault, and often fall onto and off of urban walls, roofs, and other surfaces.

As it happens, the excursion, when it occurs, will not be Poulin’s first try at parkour at Disneyland Resort. “Yeah, I always get yelled at when I’ve tried parkour in the park before, usually by some stuck-up custodial or guest control cast member. ‘Walk!’ ‘Use the sidewalk!’ ‘Get down from there!’ ‘How the heck did you get up there?’ I’ve heard it a lot.

“I had to find a way to get permission, and it’s been years in the making, starting with volunteering as an intern for Adventures by Disney, eventually getting hired answering phones, and then working my way up to trip planner. It’s the end result of a lot of work.”

For now, Poulin admits, no one has signed up to take the trip, and feedback indicates that potential guests are nervous about the safety of the activities — particularly the advertised rope-free descent down the “Guardians of the Galaxy – Mission: BREAKOUT” tower. Poulin is currently trying to talk several of his buddies into signing up so he can lead the expedition, but they are “hung up” on and refusing to sign the ten-page liability release form.

“I hope we get some takers,” Poulin says. “Otherwise it’s back to leading guided tours of New Jersey.”

Will you be signing up for Disneyland Parkour? Let us know in the comments!

February 2, 2018 by Marty in California
© 2020 Uncle Walt's Insider. All rights reserved. All images used with permission. Unless otherwise attributed, all images licensed under Creative Commons CC0 license. This site is protected by reCAPTCHA and the Google Privacy Policy and Terms of Service apply.