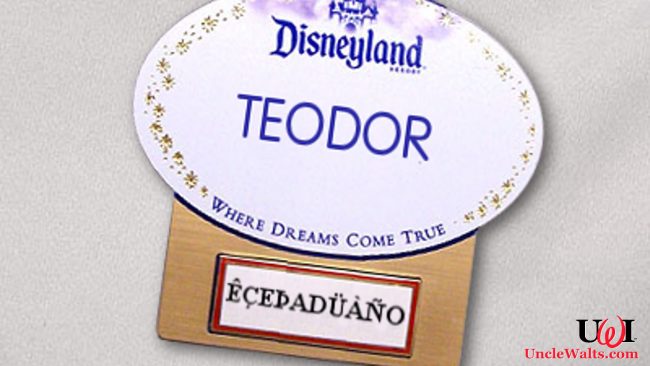 “I thought it came with extra pay.”

ANAHEIM, CA — It’s not uncommon to see cast members at Disney parks in the United States with an addition to their name badge indicating their fluency in a language other than English. But Teodor Kennard, a custodial cast member at Disneyland Park, is the only cast member able to speak Êçeþadüàño, and with good reason — the language does not exist.

“It’s this gibberish thing my brother Trevor and I made up when we were kids,” Kennard, 23, shares. “We had this whole backstory about this isolated community somewhere in the Carpathian Mountains, and we created the name by stringing together some weird letters using Windows’ character map.

“When I applied for a job here at Disneyland, the application asked if I spoke any other languages. I’ve got a slightly unusual first name, and I thought it came with extra pay, so I wrote it down and did my interview speaking with a made-up accent. I actually grew up in La Jolla.”

Disney HR lead Steve Appleby hired Kennard. “Yeah, we know he made it up,” Applebee tells Uncle Walt’s Insider. “But first, we wanted to see who would crack up first in the interview, him or us, and neither did. And second, we were curious if the department that creates name badges would be able to handle it — and I have to say, they did a pretty good job.

“Oh, and we also really needed to fill some spots in custodial.”

Do you speak Êçeþadüàño? Let us know in the comments below!

April 26, 2018 by Marty in California
© 2020 Uncle Walt's Insider. All rights reserved. All images used with permission. Unless otherwise attributed, all images licensed under Creative Commons CC0 license. This site is protected by reCAPTCHA and the Google Privacy Policy and Terms of Service apply.