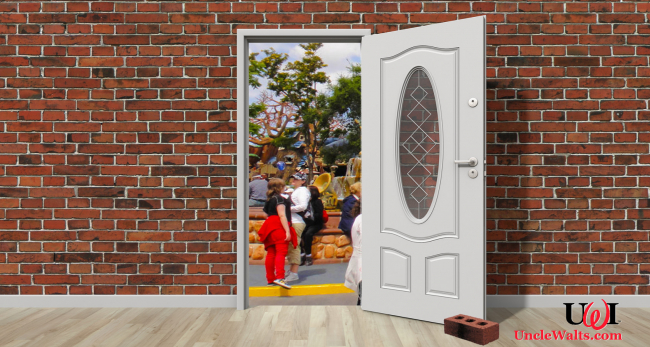 But is his punishment too evil, even for Disney?

ANAHEIM, CA — It’s a blunder that cost the Disneyland Resort unknown thousands of dollars last Tuesday. A custodial Cast Member propped open the back door to the park while taking the day’s trash to the dumpster. Consequently, hundreds of guests were able to enter Disneyland for free.

“Yeah, I knew it was against the rules,” Dan McInnes, 19, told Uncle Walt’s Insider. “But it was just going to be for a few minutes. I found a brick behind the park and just propped the back door open. And I maybe had my back turned to it for, like, three minutes.”

McInnes, who had only worked at Disneyland Park and Spa for three months, was unaware of the fan obsession with Disneyland’s back door.

“Sure, now I know,” McInnes says. “But no one had ever told me about how fans train the HoJo Anaheim webcam on the back entrance during park hours. And if they ever see the door propped open, they send out word and storm the entrance.”

McInnes was not fired, but he says termination would have been easier to take.

“No, I’ve just been reassigned to a food cart,” he shares. “I now do nothing but sell churros. And I’m forbidden to ever eat any, even if I were to pay for them.”

At press time, the Greater Los Angeles chapter of the A.C.L.U. was contemplated filing a lawsuit on McInnes’ behalf, claiming Disney was subjecting him to cruel and unusual punishment.

Would you sneak in Disneyland’s back door? Let us know in the comments below!

November 6, 2018 by Marty in California
© 2020 Uncle Walt's Insider. All rights reserved. All images used with permission. Unless otherwise attributed, all images licensed under Creative Commons CC0 license. This site is protected by reCAPTCHA and the Google Privacy Policy and Terms of Service apply.