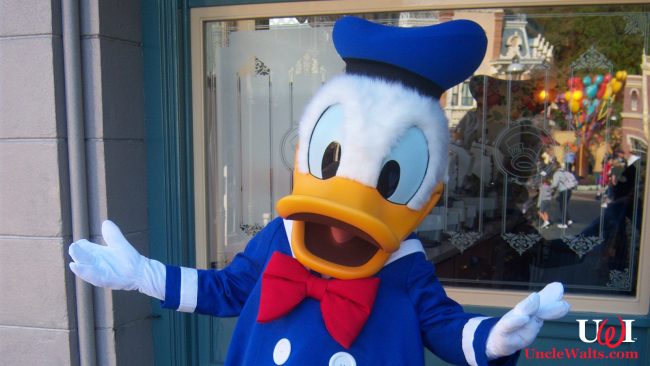 Fortunately, though, no one could really understand him.

ANAHEIM, CA — Directly in the wake of the controversy surrounding a certain Disney/ABC personality making outrageous and offensive comments, another popular celebrity associated with the brand has come under fire.

Donald Duck, beloved cartoon character and company icon, was accused by a Disneyland park guest of making “inappropriate and sexist remarks” to her as she passed by.

The guest, who filed the complaint anonymously (but who we found was Eunice Garbitt, 24, a graduate student at the University of California at Berkeley’s Department of Gender and Women’s Studies), could not specifically recall what words Donald said, but stated that it was “obvious in his tone and his facial expression that he was intending to oppress me.”

Park officials reviewed recordings of the incident and concluded there was no wrongdoing. The California legislature, however, has promised to enact a tax on “anthropomorphic waterfowl who utter misunderstood or unintelligible comments.”

June 2, 2018 by Marty in California
© 2020 Uncle Walt's Insider. All rights reserved. All images used with permission. Unless otherwise attributed, all images licensed under Creative Commons CC0 license. This site is protected by reCAPTCHA and the Google Privacy Policy and Terms of Service apply.