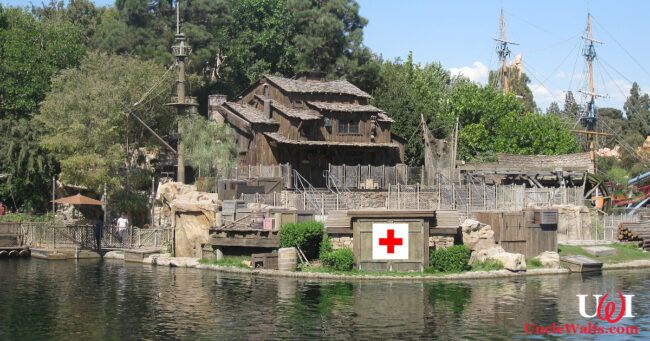 ANAHEIM, CA — Stymied in their efforts to open their theme parks, Disney has joined the fight against Covid-19.

The Disney Company announced today that Tom Sawyer Island at the Disneyland Park will become a Covid-19 ward. Disney has already outfitted the island with the necessary medical equipment and trained Cast Members to handle Covid-19 patients.

They won’t put patients in Dead Man’s Grotto, will they?

A temporary bridge is being constructed to get patients and Cast Members safely onto the island. Disney is unable to use the rafts, as they are normally considered to be attractions — and Grand Emperor Newsom (D irtbag ) has declared that any sort of amusement ride is unnecessary to the happiness and well-being of the the little people.

Park officials have also petitioned the FDA to certify nightly performances of Fantasmic as a permissive treatment for the virus.

Do you want to get Covid-19 so you can go to Disneyland? Let us know in the comments below!

Cover photo: At least no one ever dies inside a Disney park, right? Photo by deror_avi [CC BY-SA 3.0] via Wikimedia.

January 23, 2021 by Walt in California
© 2020 Uncle Walt's Insider. All rights reserved. All images used with permission. Unless otherwise attributed, all images licensed under Creative Commons CC0 license. This site is protected by reCAPTCHA and the Google Privacy Policy and Terms of Service apply.