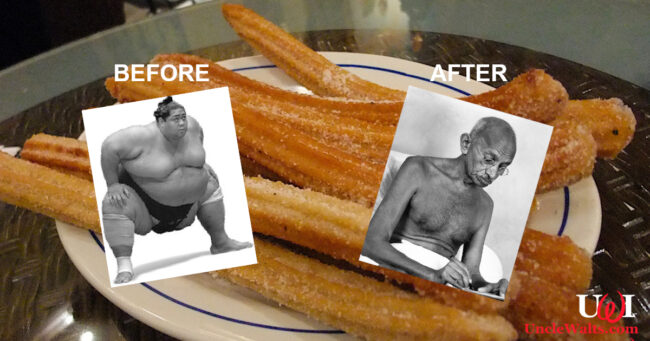 Really? This type clickbait headline is what Uncle Walt’s Insider has sunk to?

GARDEN GROVE, CA — Uncle Walt’s Insider recently learned of a man who lost 350 pounds on the Churro Diet! This is his story.

Tom “Tommy” Thomason (pictured above, maybe) started his weight loss journey in late 2019, vowing to make use of his Disneyland Annual Pass to walk the parks daily and only eat one churro a day. While some would say this diet lacked vitamins and any actual nutrients, Tommy said he never felt better, especially in the first few months while the parks were still open.

Since then, Thomason lost 350 pounds ! While his diet plan was successful, he more attributes his weight loss to the parks’ closure for over a year, his inability to actually get a churro, and the subsequent coma that he went into following the lack of nutrients in his body.

Congrats, Tommy, not only on your weight loss, but on your ability to eat just one churro a day!

How many churros have you eaten in one sitting? Let us know in the comments below!

Cover photo: Totally not fake before and after photos of this guy. Churro photo by Mark Mitchell [CC BY 2.0] via Flickr; Before photo [CC BY-NC-ND 3.0] from probaway.com; After photo Public Domain via Wikimedia.

August 15, 2021 by Walt in California, Spotlight
© 2020 Uncle Walt's Insider. All rights reserved. All images used with permission. Unless otherwise attributed, all images licensed under Creative Commons CC0 license. This site is protected by reCAPTCHA and the Google Privacy Policy and Terms of Service apply.