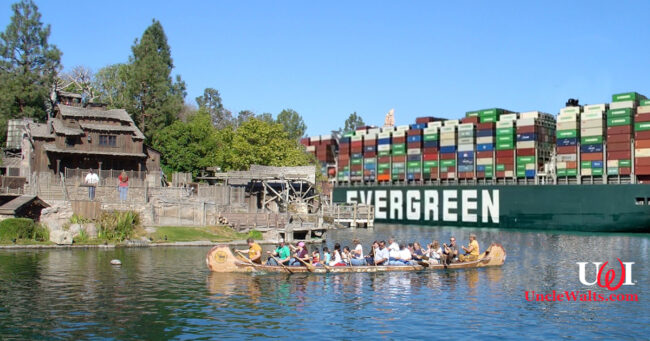 Where have we seen that ship before?

ANAHEIM, CA — Uncle Walt’s Insider has learned that an accident at Disneyland, before the park re-opened, nearly pushed back the re-opening date. Disney (the company) spokesperson Jun Disney (no relation) explained what happened.

“We knew Disneyland re-opening was going to be the biggest thing to happen to California since Disneyland opened in 1955,” Disney told Uncle Walt’s Insider. “So in preparation for that, we order extra Churros. A lot extra. A LOT extra. Hey, people have been deprived of authentic Disneyland Churros for well over a year now, so we knew demand would be tremendous.

“Anyway, things went sideways. Literally. One of the cargo ships delivering Churros to the park got stuck as it was sailing up the Rivers of America.”

Only a few casualties? Churros are worth it

Disney (no relation) continues, “At first we thought we could just send canoes full of Cast Members toward the ship to dislodge it, but that failed. Oh, and FYI, memorial services are pending, just as soon as we sort out the lawsuits.

“Our next thought was to use the Mike Fink Keelboats, then we remembered those sunk in the Great Beaver Brothers Uprising of May 17, 1997. We then thought about asking the Pirates at the Pirates Lair on Tom Sawyer Island, but we found they had died of starvation during the Covid shutdown. Turns out someone forgot to get them off the Island when the park closed. Oops. But hey, the upside is the skeletons look more realistic now!

“We also thought about ramming the ship with the Mark Twain or the Sailing Ship Columbia, but then we remembered the canoe mishap.”

We knew he did CrossFit. He never shuts up about it

But you did get the ship unstuck, right? we asked Disney (no relation). How?

“We finally got it freed by just having every Cast Member we could round up stand on the aft of the boat, and on the count of three, they all jumped. It was enough to get the front of the ship lifted as Brett from accounting, who does CrossFit, pushed on the bow of the ship, setting it straight.

“Disaster averted, and the park re-opened with Churros!”

I could really go for a churro right now. How about you? Let us know in the comments below!

Cover photo: A familiar-looking ship blocks the Rivers of America. Photo by “Chuck, aka SolGrundy on Flickr” [CC BY-SA 2.0] via Wikimedia Commons.

June 10, 2021 by Walt in California
© 2020 Uncle Walt's Insider. All rights reserved. All images used with permission. Unless otherwise attributed, all images licensed under Creative Commons CC0 license. This site is protected by reCAPTCHA and the Google Privacy Policy and Terms of Service apply.