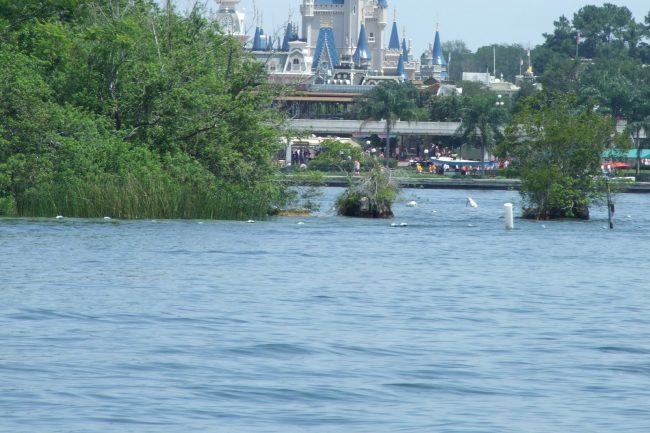 As far as parking garages go, Disney has tossed down the gauntlet on the design, which will feature a three-story structure partially submerged in the north end of the Seven Seas Lagoon. The preliminary blueprints also show an underwater vehicle tunnel extending the full length of the lagoon, with its entrance located between the Transportation and Ticket Center (TTC) and Disney’s Polynesian Village Resort, and a pedestrian tunnel (likely featuring moving sidewalks) connecting the garage to the Disney’s Grand Floridian Resort and Spa. The World Drive overpass construction currently underway at the entrance to Magic Kingdom parking already includes an extension to the parking garage tunnel entrance. 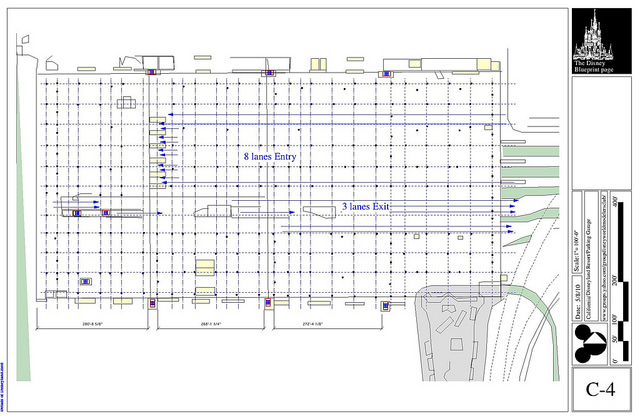 The Seven Seas Lagoon, a man-made lake reaching a maximum depth of 14 feet, will be drained for the construction. The temporary drainage will have a tremendous impact on the guest experience, as the lagoon is surrounded by three resorts, the Magic Kingdom park, and the TTC. It hosts ferry boat transportation between the TTC and Magic Kingdom, smaller launch boats between the Magic Kingdom and its resorts, and countless recreation boats available at the resorts.

Uncle Walt’s Insider reached out to The Disney Company for further information, and spokesperson Marty Martin replied, “We are excited over this newest addition to the Walt Disney World Resort. As it stands, the current plan will allow guests to purchase points to utilize towards a parking space, in essence following the same model as the Disney Vacation Club.” Mr. Martin also confirmed that construction will begin in late summer 2018, and will entail the lagoon being capped off at the water bridge and drained for the duration of the construction, so as to not cause any issues with the adjoining body of water, Bay Lake.

There are concerns about the construction causing heavy delays for people entering and exiting the Magic Kingdom Park, since guests will not have access to the ferries during the drainage. Mr. Martin had this to say in response: “The Disney Company has already brought these issues forward and plans to add more buses to the routes for the TTC and affected resorts. So now guests will have two new options to reach the Magic Kingdom. If the monorail is overloaded, they can experience the fun of taking a Disney bus, or they can enjoy an scenic walk around the [drained] lagoon! But yeah, we will have the boats reinstated as soon as possible.”

We spoke to guests at the Disney Parks for their reaction and received mixed reviews. Canadian guest Liam Winthorpe from London, Ontario, was polite but negative about this new addition. “My family and I make this trip once a year, but as it stands, if this plan goes ahead I doubt we will return for some time. The extra wait to get into the park will be a nightmare.”  Helen Campbell from Orlando, Florida, expressed similar feelings. “I hold an annual pass and come to the parks at least once a week, and while I will continue to return I feel it ridiculous to allow specialized treatment to those who can afford it.”

Not everyone held these same sentiments. Uncle Walt’s Insider spoke with Carol Higginbottom from Camden, Maine, the current occupant of the exclusive Grand Suite in Disney’s Grand Floridian Resort and Spa, and she was excited at the prospect. “We take the kids and grandkids two or three times a year, so to pay for closer parking and avoid lines is great!” We asked Mrs. Higginbottom her thoughts on the boats being affected during the construction but she was unable to provide an opinion, as she “did not even know there were boats here at Disneyland.”

We here at Uncle Walt’s Insider are excited at the prospect of this new endeavor and will keep all of our readers up to date on any new information that becomes available.

October 30, 2017 by Harriet in Florida
© 2020 Uncle Walt's Insider. All rights reserved. All images used with permission. Unless otherwise attributed, all images licensed under Creative Commons CC0 license. This site is protected by reCAPTCHA and the Google Privacy Policy and Terms of Service apply.