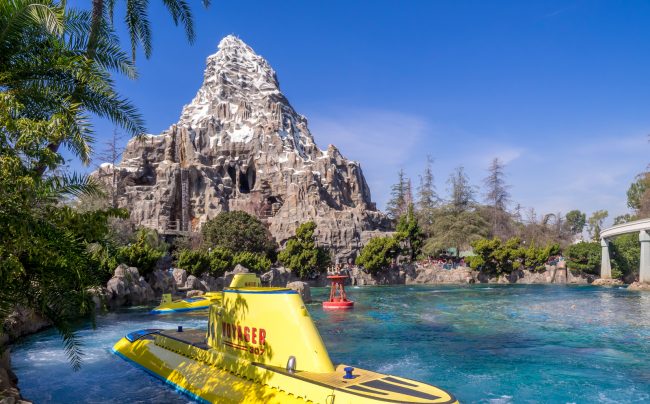 5. Real bullets at Frontierland’s Shootin’ Exposition – Most Disneyland fans know that rifles of the shooting arcade in Frontierland originally shot real lead pellets and have since been modified to use infrared light to simulate firing. But did you know that one rifle still fires real projectiles? The park isn’t allowed to use the word “shootin'” unless one functioning rifle is kept active. Cast members change its position each night, and the only way to tell if you are using it is to fire at a person, so most guests never even notice the difference.

4. Sleeping Beauty Castle is only 27 feet tall – Everyone knows Florida’s Cinderella Castle is significantly larger (standing 383 feet tall) than Disneyland’s castle, but Imagineers use forced perspective to make even the diminutive Sleeping Beauty Castle seem larger than it is. That’s also why no guest taller than four feet two inches is allowed to pass through the castle.

3. The “Partners” statue predicted California Adventure – Sculpture and Disney Legend Blaine Gibson designed the statue to show Walt Disney’s right hand outstretched, symbolizing how Walt was always looking towards the future. Originally, the statue was supposed to be oriented so that Walt pointed to the East, towards what was known at his death as “the Florida Project” and which became Walt Disney World. However, when the statue was installed in 1993, park officials had already begun planning the second Anaheim theme park across from Disneyland’s entrance, so the statue was placed with Walt gesturing towards the future location of California Adventure.

2. Disneyland restaurants “officially” no longer serve mouse – Early after Disneyland opened, the park received many complaints from parents about the inclusion of mouse-burgers and mouse-dogs on quick service restaurant menus, saying that their kids were worried they were “eating Mickey or Minnie.” This led to the park banning any mention of mouse meat on park menus, although it may still be an ingredient in many dishes.

1. The Matterhorn is not really a mountain – This was a surprise to all of us here at Uncle Walt’s Insider, but did you know that Disneyland’s Matterhorn is man-made and contains a roller coaster? It’s modeled after a real mountain located in Switzerland.

What Disneyland facts surprised you the most? Let us know in the comments!

Page 2 of 2«12
December 1, 2017 by Marty in California
© 2020 Uncle Walt's Insider. All rights reserved. All images used with permission. Unless otherwise attributed, all images licensed under Creative Commons CC0 license. This site is protected by reCAPTCHA and the Google Privacy Policy and Terms of Service apply.