This has GOT to get me in the Disney parade this year!!!

Week 43 Caption Contest results! I really missed the suggestions from those of you here (thanks, YANXWIN, for at least providing one SGT entry!), what with SGT being down most of the week, but there was still plenty of hilarity from other sources. First, the Honorable Mentions: Jay Marsh: "Practicing his grand entry for the Hunger Games, it was too late to reconsider the spray glue on his skinny jeans."; Bill Carleton: "And this why you never, EVER, put a wombat on the front row!"; and Rich Eick: "Brad, not being a bass, had to prove he is worthy of singing Ring of Fire." 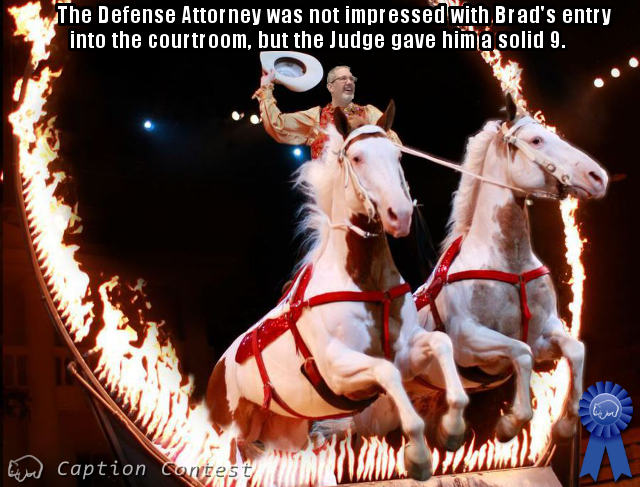 And for the second week in a row, your Caption Contest winner is ktulu, his sixth win in 2014 and tenth overall! Congratulations, ktulu!

Thanks to all who entered! New picture on Monday! (It might be themed to an upcoming holiday.)

2014 CAPTION CONTEST, Week 44 -- My mom: "So what are you doing for your picture this week?" Me: "Something Thanksgiving-related. Maybe that Norman Rockwell painting." My mom: "What, with you as the turkey?"

I was more thinking "as the Grandmother" until then. In other words, blame my Mom for the turkey-related nightmares you have this week. And enjoy your dinner Thursday!

So how would you caption this picture? Comment below! 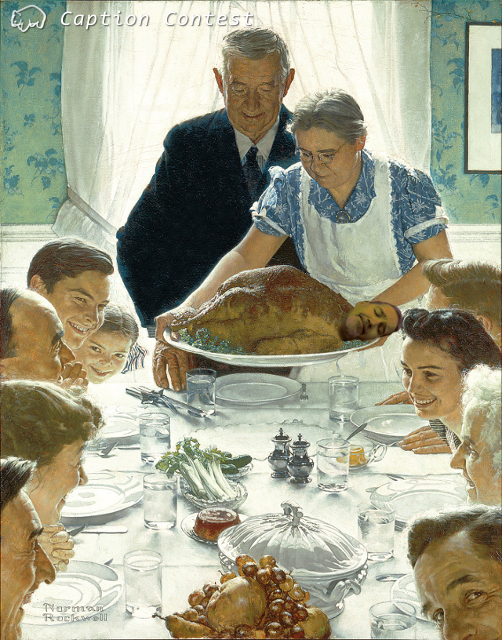 The same pic will show here, on Facebook, and on The World of Wombat. I'll repost the pic with my favorite caption on Friday. No prize this week, sorry, just the glory of winning!

Wombat realized he was in trouble when even his mom thought he was a total turkey.

While a fitting use for a turkey attorney, no one in there right mind would eat any of that "sue"-age.

How do you keep a turkey in suspense?

I'll tell you after Wombat announces this week's winner on Friday.

Instead of a turkey Grandpa came back from the store with a wombat. Grandma hoped the family would not notice the difference and vowed never to send Grandpa out for anything again.

BRWombat wrote:2014 CAPTION CONTEST, Week 44 -- My mom: "So what are you doing for your picture this week?" Me: "Something Thanksgiving-related. Maybe that Norman Rockwell painting." My mom: "What, with you as the turkey?"


Parents always need to have a very good sense of Humor

The President decided to pardon all the turkeys at Thanksgiving this year, leaving families nothing but a surplus of lawyers to roast...which wasn't necessarily a bad thing.

Grandma always has a good juicy lawyer for Thanksgiving. I wonder who is it this year?